Earlier this year court officials in Clark County, Nevada, attempted to reign in deposition misbehavior by issuing an administrative order that collects in one place the law pertaining to the most common deposition-related disputes.

The effort appears to have been successful. Since the publication of Eighth Judicial District Court (Clark County) Administrative Order 22-08 on May 9, the number of calls to court officials seeking help resolving a deposition dispute have dropped significantly.

According to Eighth District Discovery Commissioner Jay Young, prior to May 9 his office was fielding as many as 3-4 calls each day seeking mid-deposition assistance with a dispute that couldn’t be resolved by the attorneys conducting the deposition.

“Many of the problems that were being disputed were over conduct that if counsel had a good mentor and was taught better or had taken the time to read what the status of the law is, they would never be behaving in the way that they did,” Young says.

Eighth District officials believed it would be helpful to put into one place the expectations of the court regarding deposition behavior. The resulting administrative order simultaneously teaches the law and admonishes local litigators, as if to say, “Here is the law, please don’t bring these types of disputes to us in the future.”

Imagine a legal research paper signed by a judge. The administrative order contains no new law. 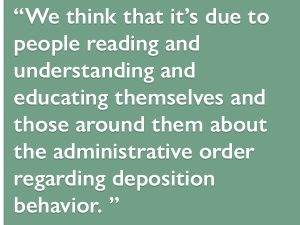 “We’re happy to announce that since the May 9 release our calls have greatly reduced,” Young says. “We think that it’s due to people reading and understanding and educating themselves and those around them about the administrative order regarding deposition behavior.”

Although the administrative order makes frequent reference to Nevada law, lawyers in any jurisdiction will immediately appreciate both the common sense and wide applicability of the court’s deposition advice.

Nevada is not the first court this year to address deposition behavior. Florida has also published proposed rules addressing many of the same topics: attorney conduct, witness conduct, in-deposition objections and instructions by attorneys for witnesses to refuse to answer questions.

Here are some of the highlights of the Eight District’s administrative order, drawn from the text and from an August 31 legal education program sponsored by the Clark County Bar Association.

Make reasonable efforts to accommodate witnesses and counsel. If coordination is impossible or unwieldy, go ahead and schedule the deposition unilaterally – but send the deposition notice with a cover letter stating a willingness to discuss alternative dates.

According to Eighth District Discovery Commissioner Erin Lee Truman, who also spoke during the bar association program, the cover letter could be helpful if counsel is later faced with a request for a protective order seeking to change the originally scheduled deposition date.

Yes, depositions are limited by court rule to “1 day of 7 hours of testimony.” But don’t be a clock watcher. Attorneys are expected to reasonably cooperate in extending the time of depositions if circumstances warrant.

Use of Documents During Deposition

Any document that is referred to, used, or attached to an exhibit during a deposition must be disclosed prior to the deposition.

“Disclosing a document for the first time during a deposition constitutes gamesmanship and may warrant sanctions,” the order states.

Witnesses must give direct answers to simple questions. Evasive testimony will be treated by the court as a failure or refusal to testify. Expert witnesses who fail to participate in good faith risk being stricken.

Responses that will be deemed evasive include: – repeated failures to give a direct answer – non-responsive narratives designed to filibuster – refusal to give estimates – impertinent statements – feigning lack of knowledge with “I don’t know” or similar avoidance tactics

Witnesses may not request a break to seek assistance with testimony. Attorneys may request a break – but only if the purpose of the break is to decide whether to assert a privilege. Breaks taken for this purpose must be documented in the deposition record.

Objections to deposition questions should be rare. Objections dealing with admissibility are preserved for trial in any event, so they need not be asserted during the deposition.

The following objections to the form of a question are proper during a deposition:

The following objections to the form of a question are improper during a deposition:

“Objection, vague and ambiguous. Counsel, what period are you asking about? If you are asking about 2019, the witness would have no knowledge.”

“Calls for speculation. The witness can’t possibly know what Mr. Y was thinking. You are asking him to guess.”

The additional commentary included in these objections amounts to inappropriate coaching of the witness.

Instructing the Witness Not to Answer

There’s no such thing as a “Person Most Knowledgeable” deposition. Nevada’s rule on company representative depositions (Rule 30(b(6)) – similar to most other jurisdictions – allows the company to designate its own Rule 30(b)(6) witness. However, the rule also obligates the company to prepare their witness to give testimony on all matters within the scope of the deposition notice.

Attorneys should work out deposition disputes themselves.

“When opinions differ regarding the propriety of a question or behavior, counsel must rise above their roles as advocates and attempt to resolve their differences without court intervention,” the administrative order reads. “Deposition disputes requiring court intervention should be extremely rare.”

If the attorneys are unable to solve the problem themselves, they may call the district discovery commissioners for assistance – but only if all attorneys agree to make the call.