Seasoned litigators know that incivility toward opposing counsel and their clients is not only unprofessional but is, ultimately, a disservice to the client. Harsh words and dilatory behavior impair constructive communications among the lawyers involved in the case, raising costs for everyone and short-circuiting opportunities for reaching a settlement prior to trial.

We’ve written several times about the value of professional civility and the ethical issues raised by uncivil behavior. And we’ve been pleased to note that lawyers recognize the importance of civility in litigation and that, according to one report, civility is alive and well within the legal profession.

But what happens when the uncivil behavior emanates from a litigant rather than counsel? Litigants, it turns out, are largely impervious to the checks and balances that promote civility within the legal profession. To what extent can litigators be blamed for their client’s misbehavior during depositions?

Take, for example, the case of Ludwin v. Proman, No. 20-81755 (S.D. Fla.), a defamation action in which the defendant could not resist the urge to display contempt for the plaintiffs during his remote video deposition. According to the court opinion sanctioning the defendant’s deposition misbehavior, the defendant:

“Throughout the deposition, Defendant Proman acted like a spoiled, entitled child who was thumbing his nose at the deposition process, and thus, at the Court,” the court observed.

The court remarked that it was “a strong proponent of remote depositions and the use of modern technology to make the litigation process less expensive and more efficient for the parties.” In most cases, the court added, “remote depositions are cost efficient, professional, productive, and effective. This, unfortunately, is not one of those cases.”

For sanctions, the defendant was ordered to sit for another deposition and to pay all attorneys’ fees, court reporter fees, and legal videographer fees, incurred by the plaintiffs during the first, remote deposition. The court remarked that it was “troubled” by the behavior of the defendant’s attorney, though it declined to specify the misbehavior. The next deposition, the court said, will be in-person and in the Southern District of Florida. (The defendant resided in California, and his lawyer at the time was based in New York.)

The court also ordered the defendant’s attorney to “familiarize himself” with the local court rules (PDF), particularly the provisions dealing with expectations regarding attorney behavior and the court’s authority to impose discipline on specially admitted attorneys. 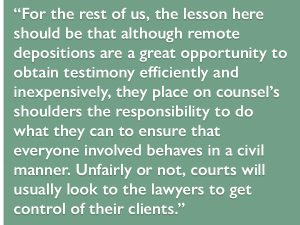 Did these sanctions have their desired impact on the litigation? Apparently not.

Eight months and 60 docket entries later, the case is limping toward a scheduled Jan. 17, 2023, trial date. The court’s docket sheet, which now contains more than 200 entries, demonstrates how litigation can spiral out of control when the task of resolving a legal dispute takes a backseat to other concerns. The docket reflects a seemingly endless amount of squabbling over pretrial discovery, of shuffling of new counsel in and old counsel out (at one point the defendant represented himself), and the filing of motions in limine, motions to strike expert reports, motions to enforce compliance with prior court orders, motions for protective orders, and motions to extend deadlines and re-schedule court dates.

Unfairly or not, courts will usually look to the lawyers to get control of their clients. The court seems to have taken that approach in the Ludwin v. Proman case, though it’s not clear what counsel did wrong or what could have been done to prevent the defendant’s deposition from spiraling out of control.