If asked to list the qualities of a successful litigator, most people would sketch a similar profile: a zealous advocate for the client, a winner, a person with tenacity, intelligence, and the ability to bring judges and juries around to the litigator’s point of view.

How about “reasonable”? One trial judge believes that’s a critical trait as well.

In his article Eight Traits of Great Trial Lawyers, Review of Litigation, Vol. 33, No. 1, 2014, former U.S. Federal District Judge Mark W. Bennett wrote that reasonableness is a trait shared by all great trial lawyers who had argued cases in his courtroom. Great litigators, Judge Bennett believed, are both zealous and reasonable. To these lawyers, reasonableness is a sign of strength, not weakness.

How does the trait of reasonableness manifest itself during pretrial discovery practice? According to Judge Bennett:

Reasonableness in the pre-trial setting takes many forms: selecting appropriate causes of actions and defenses to plead; meeting early with opposing counsel to see if issues can be voluntarily narrowed and determine the truly contested issues; discussing (sensibly) how and when to conduct discovery; agreeing on times and places for depositions; conferring with the other side in good faith before filing discovery motions; being willing to make reasonable compromises on discovery without court intervention; opposing only unreasonable requests for extensions of time; and refraining from personal attacks on opposing counsel and their clients in briefings.

Reasonableness is related to other professional ideals such as civility and professionalism, but these terms are not quite the same. Civility describes a respectful and constructive attitude toward opposing counsel and parties. Reasonableness, on the other hand, means identifying the truly critical disputed issues in litigation and giving ground where compromise impairs the client’s position very little if at all.

How important is the ability to skillfully work with opposing counsel to shape pretrial discovery limits, protect client confidential information, and set deadlines and stick to them? Well, later this month, The Sedona Conference, an influential source of legal commentary and guidance on complex litigation, data security, and electronic discovery, will hold three days of educational programming on the finer points of negotiating electronic discovery deadlines and disputes. This year’s program, eDiscovery Negotiation Training: Practical Cooperative Strategies, will feature sessions on “How to Deal With a Difficult Opponent” and “What Do Judges Expect?,” as well as current electronic discovery issues involving social media evidence, assertions of privilege, and how to thrive in online Rule 16 conferences.

It’s the seventh year in a row that the conference has been exclusively devoted to electronic discovery negotiation training.

The drafters of the 2015 round of revisions to the Federal Rules of Civil Procedure underscored the imperative for attorneys to adopt reasonable positions in pretrial discovery negotiations. Rule 1 declares that the entirety of the federal procedure rulebook should be construed, administered, and employed by the court and the parties to secure the just, speedy, and inexpensive determination of every action and proceeding.” (emphasis added.)

Commentary to the 2015 Amendment to Rule 1 makes clear that the drafters sought to emphasize that the responsibility to move cases quickly and efficiently through the federal system was a shared responsibility among judges, lawyers, and the parties before the court. “Effective advocacy is consistent with — and indeed depends upon — cooperative and proportional use of procedure,” the drafters noted.

Elsewhere in the 2015 amendments are reminders that reasonable and good-faith advocacy is expected of all federal litigators. To take just one example, the drafters’ notes accompanying Rule 16(b)(1) — governing pretrial conferences — encourage judges to hold scheduling conferences that create “direct simultaneous communication” between the parties. These conferences can be conducted in person, by telephone, “or by more sophisticated electronic means” — the latter of which has become the norm during the COVID-19 pandemic. 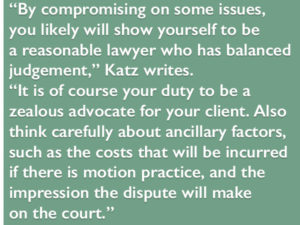 Jared M. Katz, a partner at Mullen & Henzell L.L.P. in Santa Barbara, Calif., is a believer in demonstrating a measure of reasonableness during reasonable discovery disputes. In his article Four Tips for Navigating a Discovery Dispute, he argues that litigators should leaven zealous advocacy with strategic reasonableness.

“By compromising on some issues you likely will show yourself to be a reasonable lawyer who has balanced judgment,” Katz writes. “It is of course your duty to be a zealous advocate for your client. Also think carefully about ancillary factors, such as the costs that will be incurred if there is motion practice, and the impression the dispute will make on the court.”

Katz also advises lawyers to attempt to hammer out discovery disputes with opposing counsel prior to bringing the dispute to the court’s attention via motion. (In fact, as he notes, this best practice is a requirement in nearly every court.) Meeting and conferring may resolve the dispute. At a minimum, a well-considered argument, reasonably presented to the other side “will serve you by creating a record that you have been thoughtful in handling the issue and reasonably exhausted efforts to resolve the matter informally before consuming court resources,” Katz writes.

Lawyers should also consider that courts are likely to impose a compromise solution to any discovery dispute brought before them. Why not strategically compromise without the court’s intervention and gain credit — for whatever future advantage might accrue — for being a reasonable advocate?

For lawyers wanting to succeed more often in pretrial discovery negotiations, Katz offers the following advice, in a nutshell:

That all sounds very reasonable to us.