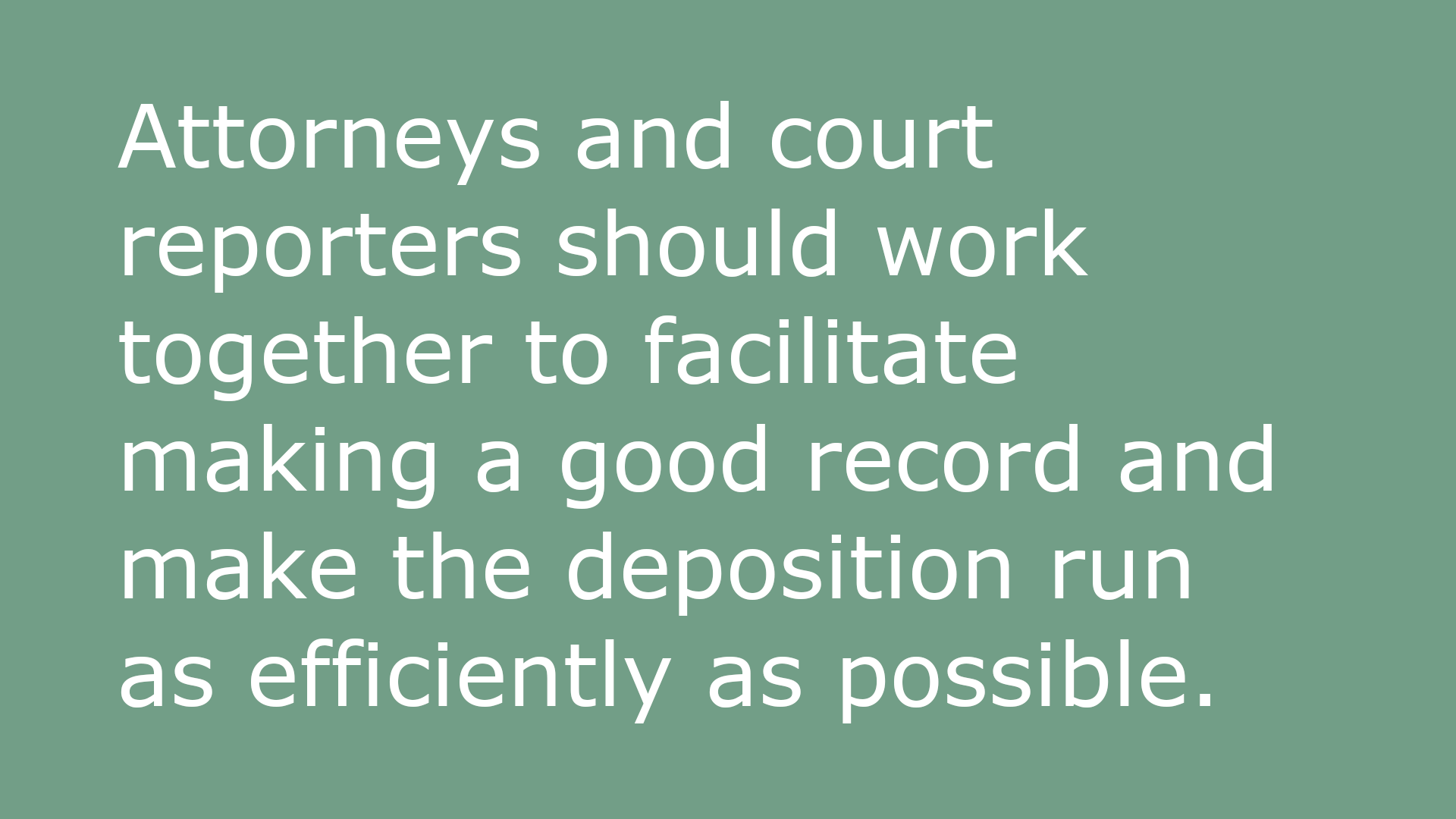 Everyone in the room wants a deposition to go smoothly. It’s more productive for you, less stressful for the witnesses, and easier for the court reporters to get the job done. However, you may be unaware of simple things you can do to facilitate making a good record and increase both clarity and efficiency.

Here are six things your court reporter wishes you’d do:

When you share information in advance, it makes the court reporter’s job easier and makes the deposition more efficient. To keep your deposition flowing:

2. Take charge of creating the record.

Remember that while it is the court reporter’s job to preserve the record, it is your job to create it. That means:

3. Ask your witnesses to speak clearly.

Many attorneys warn deposition witnesses they’ll have to answer questions out loud, rather than relying on head nods and shrugs. But, for the best results, some further instructions are required. These include:

While the court reporter can ask the witness to speak up or repeat the last response, an attorney instructing his or her witness in advance may be better received and can streamline the process and avoid interruptions.

Court reporters type fast. In fact, certification by the National Court Reporters Association (NCRA) requires a minimum speed of 225 wpm, which is about the average person’s speaking rate. That said, attorneys often talk fast. Maintaining a steadier pace helps ensure that your court reporter won’t have to stop you for clarification.

Some circumstances in which unconsciously speeding up is common include:

5. Remember that the court reporter can only do one thing at a time.

This is easy to overlook, because the other participants in the deposition, attorneys included, can continue to talk while doing something else with their hands. A court reporter, however, can’t take his or her hands off the keys and continue to do the job. If you’ve asked your reporter to perform another task, such as marking an exhibit, be sure to pause and wait until the court reporter is ready to start writing again to ask your next question.

Attorneys and witnesses are often eager to get depositions over with, particularly if there’s more than one deposition on the agenda for the day, but court reporting requires constant focus and typing—periodic breaks are very welcome to reporters. A 15-minute break every two hours would be welcomed by the court reporter. The break is also a great opportunity to check in with the court reporter to make sure everything is running smoothly or offer spellings that would be helpful for the remainder of the deposition.

When attorneys and court reporters work together to make the deposition run as efficiently as possible, everyone’s experience is beneficial. While these tips will help eliminate obstacles in your deposition, there’s no substitute for communicating with your court reporter. A two-minute conversation before the deposition begins can alert you to issues you may not have considered and save significant time and effort as you move forward.

Reviewing the Rules of the Road: Where to Conduct a Deposition
Growing Corporate Relationships