In the early, heady days of the commercial internet, legal scholars David Johnson and David Post wrote, “because events on the Net occur everywhere but nowhere in particular … no physical jurisdiction has a more compelling claim than any other to subject these events exclusively to its laws.”

Johnson and Post were arguing, at the time (1996), that the borderless internet should be regarded as a “place” or “new space” separate and apart from the geographic world, with its own set of laws, preferably the product of self-regulatory processes, and not imposed by geographically based governments. Although their view that the internet is uniquely unsuited for traditional policymaking has not carried the day, Johnson and Post’s description of the internet as an entity that is “everywhere but nowhere in particular” is a widely accepted frame of reality today.

Laws that describe permissible behavior in terms of geography and distance don’t map well onto online activities. How far away is a remote deposition? Where is an email address? 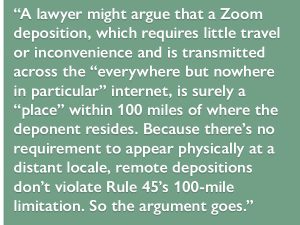 Consider the case of a non-party subpoena that declares the “place” of compliance as “VIA ZOOM VIDEO CONFERENCE.” Does this subpoena comport with the federal rules?

Cyberspace Isn’t a “Place of Compliance”

Such an argument might be compelling as a policy matter, but it doesn’t fit within the language of the federal rules. In a recent case, Federal Insurance Co. v. Tungsten Heavy Powder & Parts Inc., No. 21-cv-1197 (S.D. Calif. 2022), the court identified two problems with listing “VIA ZOOM VIDEO CONFERENCE” as the place of compliance for a non-party deposition subpoena.

The first problem arises from language in Rule 45(d), which identifies “[t]he court for the district where compliance is required” as the proper court to adjudicate challenges to Rule 45 subpoenas. In the Tungsten Heavy Powder & Parts case, filed in the Southern District of California, the subpoena was directed to a non-party located in St. Petersburg, Fla. — more than 2,400 miles away. The insurance company’s designation of “ZOOM VIDEO CONFERENCE” as the place where compliance is required makes it impossible to identify the correct court to decide subpoena-related disputes under Rule 45(d).

Second, listing “ZOOM VIDEO CONFERENCE” as the place of compliance makes it impossible to decide whether the subpoena comports with Rule 45’s geographic limitations. The court said that a subpoena that fails to designate a “specific time and place” violates Rule 45(a)(1)(A)(iii) because the place of compliance must be a physical “place” subject to “geographical limits” and capable of being measured according to mileage.

Other courts have come to the same conclusion regarding the inadequacy of specifying virtual “places” in subpoenas. For example:

Apart from the difficulties of deciding where a Zoom deposition takes place, the court in Tungsten Heavy Powder & Parts also viewed the designation of Zoom videoconferencing as the “place” of compliance as an attempt to skirt the requirement that remote depositions occur only by party agreement or court order. “Where there is no such mutual agreement, however, this Court will not permit a party’s Zoom designation to vitiate the stated purpose of the federal rules,” the court said. “In this case, the parties did not agree to a remote, videoconference deposition.”

The lesson to be drawn from these cases is that although remote depositions promise efficiency and ready access to critical evidence in cases where evidence is scattered across multiple jurisdictions, remote depositions can’t be unilaterally imposed on reluctant witnesses — particularly non-party witnesses located on the other side of the country. The prudent course of action seems always to seek agreement and proceed under stipulated arrangements whenever possible. Even when practicing in jurisdictions where judges have somewhat relaxed Rule 45’s 100-mile limit, the risks of relying on unsettled law should be readily apparent from the unfavorable outcomes cited above.