Until very recently, the rule in many jurisdictions was that any individual could attend a deposition unless the trial court ordered otherwise. Some litigators brought expert witnesses to the deposition of the opposing party’s expert witness. First-time deponents sometimes sought the comforting presence of family members. And other litigants believed that the presence of fact witnesses at an opposing party’s deposition would keep the deponent honest.

For the most part, courts allowed these third parties to attend depositions subject to a compelling, witness-specific reason why a particular individual should not be allowed to attend the deposition.

However, the rules are different when it comes to remote depositions. With a remote deposition, there is a possibility that the witness’s testimony will be tainted by third parties in the room but unknown to the questioning attorney. On the positive side, however, remote depositions allow many people to participate in the deposition by viewing it from a distance via technology.

In Maryland, for example, the applicable court rule takes a highly prescriptive approach, describing in detail who may attend a deposition. Maryland Rule 2-413.1 provides:

Unless the parties agree or the court orders otherwise, the only persons allowed to attend a deposition are:

(a) the officer, or officer’s designee, before whom the deposition is taken; (b) an individual acting under the direction and in the presence of the officer; (c) a party who is an individual; (d) if the party is not an individual, one representative of that party other than the party’s attorney; (e) the parties’ attorneys; (f) a non-attorney member of the attorney’s staff needed to assist in the representation; (g) the witness; (h) an attorney for the witness; and (i) an expert witness expected to testify on the subject matter of the deposition.

Texas places limits on who may attend a deposition, though the rule in that jurisdiction is more permissive than in Maryland. Texas Rule of Civil Procedure 199.5(a)(3) provides:

Other attendees. If any party intends to have in attendance any persons other than the witness, parties, spouses of parties, counsel, employees of counsel, and the officer taking the oral deposition, that party must give reasonable notice to all parties, either in the notice of deposition or separately, of the identity of the other persons.

In Texas, anyone may attend a deposition if proper notice is given, subject, of course, to a possible protective order if a dispute arises.

A careful lawyer might ask whether “attendance” means to be physically present with the deponent or whether an individual may attend a deposition by viewing it on a computer screen. Rule 199.5(a)(2) recognizes the distinction, using the terms “attend an oral deposition in person” and “appear by telephone or other remote electronic means.” However, the distinction isn’t found in subsection(a)(3), which uses yet a third phrase, “have in attendance.”

Yet a third approach prevails in California, where the issue of who may attend a deposition is governed by a pair of rules: Rule 3.1010 of the California Rules of Court and California Code of Civil Procedure Section 2025.420(b)(12). Rule 3.1010(a)(3) states that “[a]ny party or attorney of record may be physically present at the deposition at the location of the deponent” with at least five days written notice. No mention is made of nonparties. Rule 3.1010(a)(3)’s use of the phrase “physically present” suggests that the rule is not concerned with limiting the ability of nonparties to view the deposition remotely via technology.

The permissive approach taken in Rule 3.1010(a)(3) is limited by California Code of Civil Procedure Section 2025.420(b)(12), which gives parties the right to apply for a protective order excluding any individual — other than the parties to the action and their officers and counsel — “from attending the deposition.”

However, the trial court’s authority to grant a protective order is limited by rule to instances in which it is necessary to “protect any party, deponent, or other natural person or organization from unwarranted annoyance, embarrassment, or oppression, or undue burden and expense.”

The phrase “attending the deposition” is not defined in CCP Section 2025.420(b)(12) or elsewhere in California law.

Then there is the federal court system. No court rule specifically addresses the question of who may attend a deposition, either in person or remotely. Federal rules drafters have left the question wide open, subject only to the district court’s authority to enter a protective order restricting attendance at the deposition. Federal Rule of Civil Procedure Rule 26(c) gives the court the ability to enter “any order which justice requires to protect a party or person from annoyance, embarrassment, oppression, or undue burden or expense.”

Federal Rule of Evidence 615 authorizes trial courts to sequester witnesses, which would seem to provide a basis for excluding potential witnesses from depositions; however, Federal Rule of Civil Procedure 30(c) specifically states that Rule 615 does not apply to depositions.

Remote Depositions Have Their Own Rules 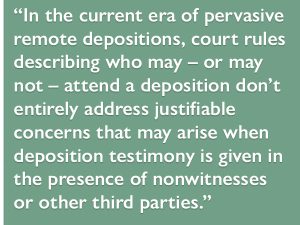 Unless remedial measures are taken, these nonwitnesses can influence testimony in ways that cannot be detected by the questioning attorney.

In Great Gulf Corp. v. Graham, No. 20-cv-1835 (D. Minn., July 13, 2022), the court ordered that the deponent testify in a room alone, with no ability to see anyone other than counsel and court reporters, during his remote deposition.

Similar protections were ordered in Rubin v. Sabharwal, 70 Misc. 3d 1216 (N.Y. Sup. Ct., Feb. 11, 2021). The court ruled that no one be physically present in the same room with the deponent during her remote deposition other than the court reporter and her attorney.

A different approach was taken when the person sought to be excluded from the remote testimony location is the deponent’s counsel. In Klein v. Facebook Inc., No. 20-cv-08570 (N.D. Calif., Sept. 13, 2021), a case decided during the height of the COVID-19 pandemic, the court declined to bar the defendant’s counsel from the remote deposition location unless the plaintiff’s counsel could also be in the room with them. The court said it expected the deponent’s counsel to behave ethically and professionally and to refrain from coaching the deponent.

Good Advice: Work It Out

Every one of the cases mentioned above is, to a certain extent, a missed opportunity to resolve a  pretrial discovery dispute efficiently and amicably, without the need for judicial intervention. Courts expect that litigators, who know their cases inside and out, will be able to craft their own solutions to pretrial discovery disputes. The question of who may attend a remote deposition is no exception.

In all cases, this means notifying opposing counsel well in advance of any nonparties (or other possibly controversial attendees) who will be attending a remote deposition, either virtually or in person. It does no good to arrive at a deposition location with a surprise visitor, only to have the deposition suspended until a court can adjudicate the opposing party’s objection.

By working out these kinds of issues in advance and memorializing agreed-upon solutions in a remote deposition protocol, litigators can ensure that their cases will move ahead in the most efficient and cost-effective manner possible.