A recent discovery ruling from an Ohio federal magistrate judge offers a helpful primer on how corporate representatives should prepare for depositions.

The ruling, In re FirstEnergy Corp. Securities Litig., No. 2:20-cv-3785 (S.D. Ohio, Aug. 19, 2022), stemmed from an exceedingly non-productive deposition of the assistant controller at FirstEnergy Corp., a company that has been embroiled in a bribery scandal and related stockholder litigation. During her deposition, the assistant controller testified over 100 times that she did not know the answer to, or was not prepared to answer, questions posed by the plaintiffs’ attorney.

This is the second time we’ve written about the pitfalls of inadequate preparation of deposition witnesses. Earlier this month a Connecticut appellate court ruled that an expert witness’s preparation for his deposition was so slight that he lacked an adequate foundation on which to offer an expert opinion.

Corporate Representative Depositions Under Rule 30(b)(6) 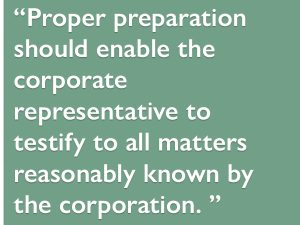 The named organization must designate one or more officers, directors, or managing agents, or designate other persons who consent to testify on its behalf; and it may set out the matters on which each person designated will testify. . . . The persons designated must testify about information known or reasonably available to the organization.

Judicial interpretations of Rule 30(b)(6) make clear that corporate representative deponents must be:

Witness Testified to What Was Already Known

In this case, FirstEnergy argued that the assistant controller met with counsel over a half-dozen times, and she reviewed several critical documents, including a 49-page deferred prosecution agreement that was at the heart of the dispute. FirstEnergy believed that this amount of preparation was enough, but the magistrate judge disagreed.

It’s clear that the amount of preparation here was inadequate, the magistrate judge said, in view of the many times that the assistant controller was unable to answer questions that FirstEnergy’s attorneys knew would be asked at the deposition.

The magistrate judge noted that, during her deposition, the assistant controller could offer little insight into the meaning of terms included in the documents she had reviewed, and she knew nothing about the corporate purpose of the documents or anything about the negotiations leading up to their execution.

“[A] designee must be able to testify fully, completely, and candidly to all matters reasonably known by the corporation,” the magistrate judge wrote. “To accept that Ashton was fully prepared would lead to a series of untenable conclusions. For instance, when asked about the purpose behind the consulting agreements, Ashton only read the language from the contracts. To accept this as adequately prepared testimony, the Court would have to conclude that FirstEnergy does not reasonably know anything, outside of the four corners of the contracts, about its own purpose for entering into the consulting agreements.”

The magistrate judge noted that the assistant controller had not reviewed many of the relevant accounting records, an oversight that the magistrate called “particularly unreasonable” in view of the fact that the deponent – a controller with FirstEnergy – held a position that uniquely qualified her to understand and interpret the company’s financial records.

As a practical matter, there’s no such thing as too much preparation for a Rule 30(b)(6) witness.

Litigation experts say that Rule 30(b)(6) witnesses should carefully review all relevant corporate documents and interview former and current employees if they have knowledge of the topics to be covered at the deposition. The topics mentioned in the Rule 30(b)(6) deposition notice should be viewed as the minimum amount of knowledge the deponent must carry into the deposition.

Attorneys preparing the witness for a Rule 30(b)(6) deposition should also discuss important aspects of the litigation in detail with the witness. The witness may be asked to give the corporation’s policy positions, or to express subjective opinions and interpretations arising from the facts.

Putting forward an under-prepared witness risks having to take the deposition over again, as happened in *In re FirstEnergy Corp. Securities Litig.* Under-prepared Rule 30(b)(6) witnesses also risk creating irreparable harm for the corporation: If the witness is unable to testify on a particular topic during the deposition, the corporation may be later precluded from offering evidence on that topic at trial.

Our collection of articles on deposition miscues, misbehavior and emerging gray areas is growing. Readers may be interested in the following articles published during the past year or so.