Palau is an island archipelago in the Pacific Ocean. The local economy depends on tourism, mainly from visitors interested in snorkeling and scuba diving along its beautiful barrier reefs.

Tourism aside, the Palau economy is dominated by the fishing trade. Palau fishermen export delicious and increasingly rare bigeye and yellowfin tuna destined for sushi restaurants, along with giant clams and trochus. Travelers from the United States can reach Palau on United Airlines after a brief stop on Guam – roughly a 62-hour journey from West Coast airports.

Significantly, Palau is 5,400 miles from the federal courthouse in Salt Lake City, Utah, where the plaintiffs in a civil rights lawsuit are insisting that Officer Jared Carlson – who decided to retire to Palau shortly after the lawsuit was filed – must be deposed in-person.

When Officer Carlson’s attorneys demurred, insisting that a remote deposition is the most reasonable means of obtaining the officer’s account of events, the plaintiff’s attorneys offered the following reasons why an in-person deposition (in Palau, if need be) was required in this case:

The law applicable to this discovery dispute is straightforward. Federal Rule of Civil Procedure 30(b)(4) provides that “[t]he parties may stipulate—or the court may on motion order—that a deposition be taken by telephone or other remote means.” In the case of a dispute, federal courts have interpreted the rule to require “good cause” for a remote deposition. However, in light of the legal community’s response to the pandemic and the prevalence of remote depositions in modern legal practice, the “good cause” barrier is nearly non-existent in many courthouses.

Officer Carlson was, according to the complaint, one of two officers involved in the allegedly unlawful arrest that gave rise to the litigation. The plaintiffs were evidently irked that he decided to move to Palau after their complaint was filed, apparently without notice to anyone. Nevertheless, neither the magistrate judge nor the district judge believed this fact was a reason to compel an in-person deposition.

The “significant technical and situational difficulties” asserted by the plaintiffs arose from the fact that a key piece of evidence was video footage captured by body cameras worn by Office Carlson and another officer during the plaintiff’s arrest. The plaintiffs claimed that it would be “practically impossible” to effectively question Officer Carlson with this video during a remote deposition. 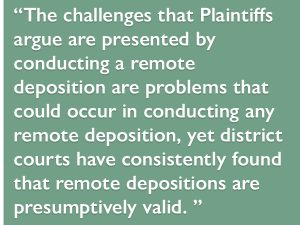 “Without a competent person on site in Palau, it is highly likely there will be technical problems,” the plaintiff argued. “It will degrade the quality and usefulness of the deposition.”

Here again, the district court was not persuaded that the burden was too great – or too out of the ordinary – to require an in-person deposition:

Further, district courts have consistently upheld orders under Rule 30 for remote depositions, in spite of similar problems being presented. Therefore, even though conducting a remote deposition may present some issues, this does not require a court to order the deposition to be conducted in person. (citations omitted)

How badly did the plaintiffs want to depose Officer Carlson in person? So badly that they were willing to pay to fly him back to Utah or to an intermediate destination such as Hawaii.

The district court was unmoved by the plaintiffs’ generosity. Even if the financial expense to Officer Carlson is covered by the plaintiffs, there will still be significant time and inconvenience, and other burdens for all parties, associated with travel to Utah or Hawaii, the court noted. “The Order for remote deposition is therefore reasonable given the distance, travel time, and potential expense,” the court wrote.

There are a couple takeaways that can be extracted from this admittedly exceptional case. The first is that leave to conduct a deposition remotely is liberally granted today. Courts decide whether to allow a remote deposition after a careful weighing of the reasons put forth by the proponent of the remote deposition and the claims of prejudice and hardship advanced by the party opposing the deposition. Only the most significant, and most case-specific, objections to a remote deposition are proving to be successful.

When the magistrate judge orders a remote deposition instead of a 62-hour jaunt to a distant tropical island, that’s going to be a tough order to overturn.