The Georgia Supreme Court’s ruling in General Motors LLC v. Buchanan, No. S21G1147 (Ga. June 1, 2022), the subject of last week’s blog post, discussed factors courts should weigh when deciding whether a high-level corporate executive should be forced to sit for a deposition under Georgia’s pretrial discovery rules. The Buchanan court declined to adopt the “apex doctrine,” which limits the ability of parties to depose corporate leaders, and instead announced a multifactor balancing inquiry in which the executive’s high rank within the corporation is just one of several factors to be considered.

In Buchanan, the plaintiff filed a wrongful death action in Georgia state courts against General Motors, a corporation headquartered in Detroit, Michigan. The Buchanan opinion discussed whether General Motors’ chief executive Mary Barra should be deposed at all.

However, in many cases in which the parties reside in different jurisdictions, discovery disputes over depositions involving corporate officers will revolve around where — not whether — those depositions should take place.

Surprisingly, the federal rules of civil procedure are completely silent on this point. Well, not completely. Nonparties can be subpoenaed to appear for a deposition if the location is within 100 miles of the deponent’s residence or place of employment, per Rule 45 of the Rules of Civil Procedure.

But in the case of parties, no federal rule explicitly limits the locations where the deposition of an opposing party can be scheduled. Rule 30(b)(1) provides merely that “[t]he notice must state the time and place of the deposition and, if known, the deponent’s name and address.”

In the event that a party objects to the proposed location of a deposition, she can file a motion for a protective order under Rule 26(c). Rule 26(c) provides that a “court may, for good cause, issue an order to protect a party or person from … undue burden or expense.”

Considerations of convenience, cost, and efficiency are paramount in these inquiries. Intertwined among these three considerations are two presumptive rules that are usually outcome-determinative in the absence of compelling reasons for a departure: 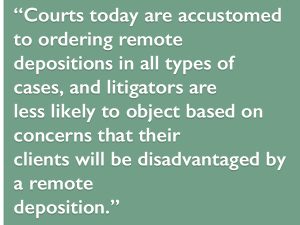 In the Buchanan case, for example, the Georgia trial court followed the presumptive rule for corporate defendants. It concluded that the deposition of defendant General Motors’ chief executive should take place at corporate headquarters in Detroit.

But in some cases, particularly cases involving foreign parties, these presumptions can be rebutted. The relatively recent case of Republic of Turkey v. Christie’s Inc., 326 F.R.D. 402 (S.D.N.Y. 2018), is a good example of the wide discretion that federal courts have in fashioning a remedy for disputes over the location of a deposition. The plaintiff, obviously, was located in Turkey, while the defendant, Christie’s, was based in New York. Christie’s filed a motion to compel several Turkish government officials to appear in New York for supplemental depositions.

Because Turkey had filed the action in the Southern District of New York, there was a presumption that it had necessarily agreed to make Turkish officials available for depositions in New York. However, the court cited a pair of factors that mitigated against the presumption: first, travel time to New York from Turkey was 14 hours; second, these same deponents had already made the same trip for an earlier round of depositions. The court concluded that an intermediate location — London — would be fair to each side. And it also ordered Turkey to pay $4,000 to offset Christie’s travel expenses.

In another case, Cadent Ltd. v. 3M Unitek Corp., 232 F.R.D. 62 (C.D. Cal. 2005), the plaintiff, an Israeli company that had filed suit in Los Angeles, objected to sending its witnesses to Los Angeles for depositions. The trial court followed the presumptive rule — i.e., that depositions of a corporate plaintiff’s witnesses should take place where the lawsuit was filed — but, citing fairness concerns, the court ordered that the defendants pay half of the plaintiff corporation’s travel and lodging expenses for the trip from Israel to Los Angeles.

For the modern litigator, technology has significantly expanded the possible locations for conducting a deposition. Travel expenses and travel-related headaches are optional in an age of remote depositions, and it seems increasingly unlikely that reluctant deponents will be ordered to travel significant distances to appear for in-person depositions.

It’s interesting to contemplate how the easy availability of remote deposition technologies might have impacted the courts’ reasoning in Christie’s and Cadent and similar cases involving geographically distant parties. A remote deposition can be unilaterally noticed without the need to seek agreement from the other side, just as the location of a deposition does not require agreement from the opposing party. From the standpoint of convenience, cost, and efficiency, remote depositions would seem to be significantly superior to international travel as a means to obtain witness testimony.

More so than ever, the frequently contested issue of where a deposition should be held is becoming, to a certain extent, irrelevant. Because a remote deposition can always take place right where the deponent is located.

RSS Error: WP HTTP Error: A valid URL was not provided.
We use cookies on our website to give you the most relevant experience by remembering your preferences and repeat visits. By clicking “Accept All”, you consent to the use of ALL the cookies. However, you may visit "Cookie Settings" to provide a controlled consent.
Cookie SettingsAccept All
Manage consent

This website uses cookies to improve your experience while you navigate through the website. Out of these, the cookies that are categorized as necessary are stored on your browser as they are essential for the working of basic functionalities of the website. We also use third-party cookies that help us analyze and understand how you use this website. These cookies will be stored in your browser only with your consent. You also have the option to opt-out of these cookies. But opting out of some of these cookies may affect your browsing experience.
Necessary Always Enabled
Necessary cookies are absolutely essential for the website to function properly. This category only includes cookies that ensures basic functionalities and security features of the website. These cookies do not store any personal information.
Non-necessary
Any cookies that may not be particularly necessary for the website to function and is used specifically to collect user personal data via analytics, ads, other embedded contents are termed as non-necessary cookies. It is mandatory to procure user consent prior to running these cookies on your website.
SAVE & ACCEPT