Is it just us, or have there been a lot of high-profile deposition disputes lately? It sure seems so. And all of them, at their core, involve rich and famous people who just will not, can not, and do not want to give deposition testimony under oath.

Deposing deposition-shy celebrities is an uphill battle. They’re used to getting their way, many have trouble exhibiting grace under pressure, and all have the financial resources to retain high-quality legal assistance to zealously advance their legal rights — or whims, as the case may be. As a result, celebrities often conduct themselves in a manner that few of us can, or should, emulate.

Nevertheless, there are lessons to be learned from their examples.

On June 21, a jury in Los Angeles found that comedian Bill Cosby sexually abused a 16-year-old girl at the Playboy Mansion in 1975. The plaintiff, Judy Huth, now 64 years old, was awarded $500,000 in damages.

The case is largely noteworthy because it is the first civil action against Cosby to reach trial and verdict. Setting aside the lurid details of the accusations leveled at Cosby, the case also provides a window into the effective use of deposition testimony in a case that was tried decades after the relevant events allegedly transpired.

News media accounts of the trial proceedings show attorneys for both sides working hard to breathe life into deposition testimony.

Cosby’s attorneys, who asserted on behalf of his client that Huth’s account was a fabrication, got in Cosby’s side of the story via a videotaped deposition given in 2015. Cosby declined to attend the trial in person, and he refused to testify (or submit to a second deposition) after invoking his Fifth Amendment privilege against self-incrimination. Cosby argued his Pennsylvania criminal conviction for sexual assault against Andrea Constand was evidence that he risked criminal consequences if forced to testify in Huth’s civil action. This risk, he contended, remained in other jurisdictions even after the Pennsylvania Supreme Court vacated his criminal conviction there in 2021. 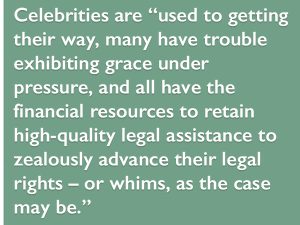 Britney Spears Conservatorship: No Shows Are a “No No”

Then there’s the kind of dispute where one party simply does not show up for the deposition. The deposition-related skirmishing between singer Britney Spears and her father is apparently one of these.

According to court filings, Britney Spears has been attempting to take the deposition of her father, and former conservator of her financial affairs, Jamie Spears, without success. According to news media accounts, the elder Spears allegedly failed to appear three times for a scheduled deposition. But that didn’t stop him from recently filing a motion for an order directing Britney to submit to a deposition, allegedly to elaborate on social media statements Britney made regarding her father and on assertions that Britney made in a forthcoming “tell-all” memoir.

The trial judge may (or may not) restore order in a July 13 hearing.

Lesson:  Failing to appear for a properly noticed deposition is disrespectful to other parties and the court; it often leads to court-imposed fines and other sanctions.

According to news media accounts, singer and actress Lady Gaga was in an emotionally agitated state immediately prior to her 2017 deposition in a civil dispute between singer Kesha Sebert (“Kesha”) and music producer Lukasz “Dr. Luke” Gottwald. At the time, Kesha was making allegations that Dr. Luke had sexually assaulted her (these allegations were later dropped).

After Lady Gaga declared her belief that Kesha’s allegations were true, Dr. Luke’s attorney questioned her about the source of this belief.

Attorney: With respect to Mr. Gottwald himself, you have absolutely no personal knowledge or information as to any interaction between him and Ms. Sebert, correct, physical or otherwise?

Gaga: Yes, I do have knowledge … She told me he assaulted her.

Rather than admit that she had no direct knowledge of the truth of Kesha’s allegations, Lady Gaga testified that she “knew in [her] heart” that Kesha was telling the truth. She then lectured Dr. Luke’s attorney, declaring that the attorney should be ashamed to question Kesha’s version of events or question Lady Gaga’s lack of direct knowledge about those claims.

Lesson #1: Lecturing the attorney asking the questions is rarely effective.

Lesson #2: Whenever possible, testimony should be limited to matters about which the deponent has direct knowledge.

By all accounts, Kanye West’s deposition in a 2013 assault charge filed against him by a paparazzi was a masterclass in how not to behave during a deposition. West cursed repeatedly, answered questions sarcastically, referred to the opposing party as “scum,” and attempted to depose the attorney who was conducting the deposition. West subsequently settled the lawsuit for an undisclosed sum.

West apparently has not mended his ways. In 2021, in yet another deposition taken in a business dispute between West and video technology company MyChannel, West reportedly wore a “Jesus mask,” laced his testimony with profanity, and repeatedly called the opposing party’s attorney “boy.”

Lesson #1: Do not insult opposing parties or their counsel.

Lesson #2: Do not exhibit delusions of grandeur or claim victim status.

Lesson #3: Do not use profanity.

Lesson #4: Do not attempt to depose the opposing party’s attorney.

Lesson #5: Answer all questions forthrightly in a calm and professional manner.

What Have We Learned?

In all cases, respect for the legal process and respect for all parties involved in the case is the best way to achieve a fair and efficient litigation outcome.

Likely there are other lessons to be learned from the celebrity deposition experiences described here. And certainly some of the lessons are, admittedly, rather obvious. Having himself dodged so many depositions, Britney Spears’ father may have difficulty obtaining judicial assistance if Britney proves difficult to depose. Lady Gaga stuck her neck out to vouch for her friends’ truthfulness, only to see those claims later dropped. And as for Kanye West, it’s difficult to imagine that his behavior during depositions will benefit either himself or the attorneys laboring on his behalf.