A prior blog post discussing effective cross-examination of expert witnesses during a deposition noted that litigators have an important decision to make when favorable, but unexpected, testimony is extracted from a deposition witness.

Should the cross-examining attorney press the witness for additional details in an attempt to discover as much favorable testimony as possible?

Or should the cross-examining attorney declare victory and move on, thus depriving the witness of an opportunity to explain or walk back a damaging admission? 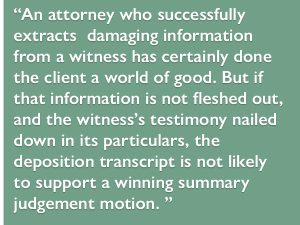 The correct course of action is not always obvious, especially during the heat of a deposition. A recent case from Florida, Gracia v. Security First Insurance Company, No. 5D21-1456 (Fla. Ct. App., 5th Dist., Sept. 9, 2022), shows the danger inherent in the “declare victory and move on” approach to cross-examination. In Gracia, the appellate court ruled that summary judgment was inappropriate because the insurance company’s attorney had failed to nail down – during a deposition – testimony suggesting that the insured had fraudulently concealed pre-existing damage to her home when she applied for property insurance.

Gracia involved an insurance claim for losses that allegedly occurred to the insured’s Orlando, Fla., residence during an April 2017 storm. Security First paid $11,000 in coverage for the damages, but later balked at a subsequent request by the insured for more money for additional alleged damages.

Security First subsequently obtained the 2015 inspection report which, it alleged, indicated that the property had roof and interior ceiling damage prior to the 2017 storm. Photographs accompanying the report revealed extensive water damage in areas that the insured had included in her claim.

False statements made during the insurance application process give the insurer the right, according to the terms of the policy, to cancel the policy. However, under Florida law, after a covered loss has occurred, the insurer must show that the alleged false statements were made with the intent to mislead in order to deny coverage on that basis.

The appellate court explained that summary judgment is only appropriate if no reasonable jury could, on the available evidence, decline to rule in the moving party’s favor. For this reason, it said, “factual questions relating to fraudulent intent or state of mind are generally not ripe for summary judgment determination.” The appellate court said that the evidence uncovered during the deposition was insufficient to support summary judgment in favor of the insurer. On the available evidence, it said, the questions of whether the insured harbored an intent to defraud the insurance company and whether her alleged false statements were material were for the jury to decide.

Judge Eric J. Eisnaugle filed a concurring opinion pointing out that, in his view, the questions asked during the deposition didn’t produce testimony specific enough to support a finding of fraud for purposes of summary judgment. The insured’s assertions that “[e]verything was good” and the “[r]oof was in good condition” were too generalized and too vague to establish falsity, the judge wrote. Judge Eisnaugle also remarked that the deposition questions to the insured were “ill-defined” ones that didn’t yield testimony conclusively establishing fraud against the insurer.

Security First may very well prevail when this case is tried to a jury. The Gracia ruling shows, however, the ways that in-deposition decisions by litigators can change the course of litigation.