It’s one thing to say that video is more impactful than the spoken word or words printed on a sheet of paper. But it’s quite another to personally experience the power of video, as we all have during the past two years of virtual hearings, Zoom meetings, and remote depositions.

Litigators today know that video images make a strong impression on the viewer. They have experienced it in their practices, and, like the rest of us, they live in a world saturated with video screens. Video reveals (so we believe) who is prepared and who is not, who is telling the truth, and who is evasive.

Today litigators across the country know how to communicate via video with clients, judges, deposition witnesses, and — in some cases — juries. They’re familiar with the technology, many have in-office video studios, and they likely have formed strong opinions about how to look and sound their best on video.

Finally, there are the people whom successful litigators must win over during trial — the fact-finders, either a judge or jury. More than ever, these people are accustomed to gathering information and learning through video. We may not yet be living in a world where video images have supplanted text as the primary means of understanding the world, but we’re headed in that direction. We’re certainly living in a world where large portions of the population eschew the printed page in favor of TikTok, Twitter, YouTube, and other forms of bite-sized video communications.

Jurors understand and relate to video images. They’re steeped in them every day.

Against this backdrop, it’s fair to ask whether video depositions should not play a larger role in pretrial discovery and trial preparation.

Here are 10 reasons why litigators should consider recording a deposition on video. Although most of these reasons are familiar to many, it’s worthwhile to ask whether these reasons might be even more compelling in 2022 than in, say, 2000. 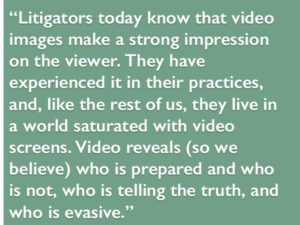 The world has undeniably changed in the past few years. More than ever, people who have been educated by video, entertained by video, and who increasingly relate to the world through video, are finding their way into jury boxes across the country.

Just last year, researchers at the Massachusetts Institute of Technology reported that individuals they studied found video evidence “modestly but meaningfully” more authentic and credible than text. Moreover, these same individuals were more likely to pay attention to video evidence that was presented in a mix of both textual evidence and video evidence.

Now might be a good time for litigators to reconsider how the timeworn adage “seeing is believing” applies to their case. Is this witness’s testimony so critical that it must be presented “live” – or a close approximation of “live” – to the factfinder? Will the factfinder be able to understand complex testimony without being able to see and hear the witness? Will my text-based evidence seem “real” to a jury accustomed to video images? Regardless of how these questions have been answered in years past, the answers today may very well be different.